In light of Donald Trumps’s racist remarks, the hashtag #latinagirlsunite emerged on Twitter bringing together Latinas and debunking stereotypes.  It is imperative that we use our vote and elect a leader who will stand with us on the issues that matter most to us . According to the Pew Research Center in 2010 21.3 million Latinos were eligible to vote and yet only 6.6 million did. It is time to change that 31.2 % percent and strive towards higher voter participation rates. I am extremely excited to be able to vote in the upcoming 2016 Presidential elections and am doing research on my favorite candidates in my spare time, currently my two favorites are Bernie Sanders and Hillary Clinton. The latino vote is valuable and we can not give to someone who is openly racist or to someone of a spanish surname whose stances we do not share. 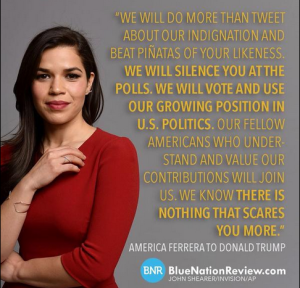